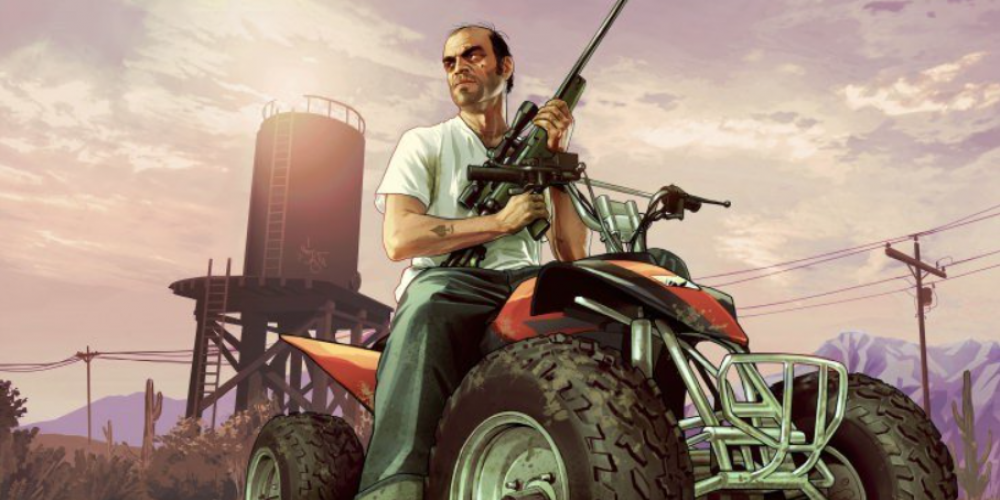 Grand Theft Auto V is an action-adventure video game developed by Rockstar North and published by Rockstar Games. Set within the fictional state of San Andreas, based in Southern California, the single-player story follows three criminals and their efforts to commit heists while under pressure from a government agency. The open-world design lets players freely roam San Andreas' open countryside and the fictional city of Los Santos, based on Los Angeles.

Grand Theft Auto V is an action-adventure game played from either a first-person or third-person perspective. Players complete missions—linear scenarios with set objectives—to progress through the story. Outside of missions, players may freely roam the open world. Composed of the San Andreas open countryside area, including the fictional Blaine County, and the city of Los Santos, the world is much larger in area than earlier entries in the series. It may be fully explored after the game's beginning without restriction, although story progress unlocks more gameplay content.

Grand Theft Auto V is set within the fictional state of San Andreas, based in Southern California, in 2013. The single-player story revolves around three protagonists—Michael De Santa, Trevor Philips, and Franklin Clinton—criminals whose stories interconnect as they complete missions. Some missions are completed with only one character, while others feature two or three.

As the game progresses, each character's distinct skill sets are unlocked. Michael, a retired bank robber, relies on his stealth and shooting abilities; Trevor, a former military pilot, is proficient in piloting and uses improvisation and violence to overcome challenges; and Franklin, a street gang member, is an expert driver and uses his driving skills to perform heists.

Throughout the game, players are able to switch between the three protagonists at will. The game's cover system allows players to take cover behind objects to avoid enemy fire. Players can also use stealth to avoid enemies or engage them in melee combat.

The game caused controversies related to its depiction of women and a mission featuring torture during a hostage interrogation. The game generated $800 million on its first day of release, and $1 billion in its first three days, making it the fastest-selling entertainment product in history. It received perfect scores from several publications, including The Guardian, Metro, IGN, GameSpot, and Game Informer. It is the third-best-selling video game of all time with over 115 million copies shipped.